Shark washed up on Road after a Storm

In Australia,emergency services found a bull shark stranded in the middle of the road during their clear up operation in the area. After a local storm hit the small town of Ayr in northeast Australia, locals usually find debris from trees and surrounding structures. But finding a bull shark was the last thing they expected to find as they assessed the damage caused by the storm. 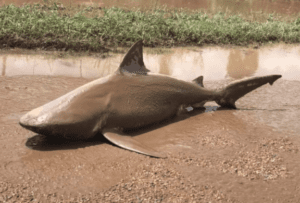 The storm, named Debbie, was strong tropical cyclone that had strong wind gusts and brought the water in from the nearby river. The emergency services had shared the photo in social media of the dead shark in the middle of the road and had warned the public not to venture into the flood waters near the Burdekin River, just in case it had any of its kind still left behind. There had also been several memes and tweets to accompany the photo which has gone viral on social media. 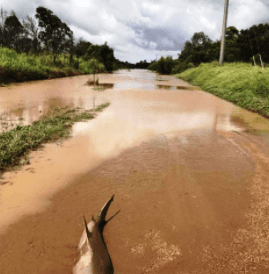 According to the local news, there was only moderate flooding caused by the storm, with most of it centralized near the Burdekin River. But the flooding in the river area had reached as high as 9 meters. The shark had probably been trying to escape the rough waters of the flood and had beached itself on the road. The shark looked clean and was barely decomposing, a sign that it wasn’t beached for a long time. Some locals have taken pictures to share online, and some even took a tooth out of the shark as a souvenir.