During one of Arnold’s many promotions for the Special Olympics, he received a particularly vulgar comment from an internet troll. But instead of banning or replying in anger at the internet troll, Arnold decides to make an example of him. Not only did he shut down the offensive troll, but he was also able to use it as a tool to share and teach people about the event.

This all started when a troll made a comment on Schwarzenegger’s twitter post regarding the special Olympics. As the ambassador for the Special Olympics, Arnold had tweeted a picture of one of the athletes and said he was “So inspired by the great athletes I’m meeting at @SpecialOlympics in Austria.” The troll then said: “The Olympics are for the best athletes in the entire world to compete against each other to determine who is the best. Having râ€”â€“s competing is doing the opposite!” 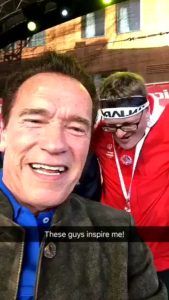 The former bodybuilding champion and legendary actor then quickly replied and shut down the troll. In his retort Arnold wrote:

“As evil and stupid as this comment is, I’m not going to delete it or ban you (yet) because it’s a teachable moment. You have two possible paths ahead. Right now, I guarantee you that these athletes have more courage, compassion, brains and skill â€” actually more of every positive human quality than you. So take their path â€” you could learn from them, and try to challenge yourself, to give back, to add something to the world. Or you can stay on your path, and keep being a sad, pitiful, jealous Internet troll who adds nothing to the world but mocks anyone who does out of small-minded jealousy. I know that all you really want is attention, so let me be clear. If you choose to keep going this way, no one will ever remember you.” 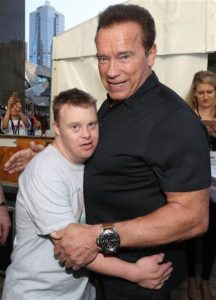 The troll had then deleted his comment out of embarrassment, but not before fans of the Austrian Actor was able to capture the exchange between the two. What followed was a series of supportive comments and likes for Arnold and his cause. Â Schwarzenegger has been a supporter of the Special Olympics for decades. The even in the 1960’s and was founded by Eunice Kennedy Shriver, his former mother-in-law.