In Colchester, Vermont, spectators witnessed the Vermont Giant Pumpkin Growers Association Annual Weigh-Off to measure the biggest pumpkin made for show. Aside from the gigantic pumpkins, the festival also features orange t-shirts, earrings, hats, rings, and water bottles, to keep in the theme of the orange pumpkins brought in to be measured and weighed. 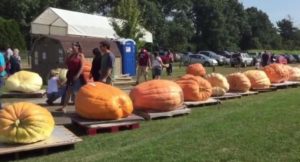 The top pumpkin was awarded to Matt DeBacco of Rocky Hill, Connecticut. His pumpkin weighed a whopping 1,435 pounds. Next was Wendy Paterson of Castleton, who had a 1,300 pound pumpkin, then Dale Duffy from Fairfax, who had a 1,256 pound pumpkin. Â DeBacco said he grew his pumpkin on a “non-rocky” part of Rocky Hill in April. He said he kept it warm with heating cables when the region suffered from a cold spring. 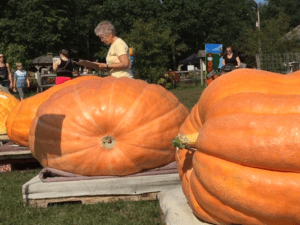 “In June, when I came out of the cold frame, I got hit with hail. All my plants were pretty well beat up,” said DeBacco “It destroyed all my umbrellas I had had out to protect them from the hot sun. It set the plants back quite a ways.” Debacco then cut the plant from the vine and placed the stem on a water jug, “It drank about a gallon and a half since when I picked it since this morning,” he said. “The goal is not to lose any weight. Every pound, every ounce counts. I’ve been growing these things for the past 17 years. The goal is to learn something every year.”

According to these growers, a single giant pumpkin plant requires around 100 gallons of water each day, and even more when it’s not raining. Most of them also added that using milk to grown giant pumpkins is just an old wives tale and a superstition, and that dairy did not actually help in its growth.