Earlier this week, an unknown student from the University of Wisconsin-Madison has gained online fame thanks to the picture of his attire. This young man was out and about during winter with nothing but knee high shorts and a simple short-sleeved shirt. Many users have either applauded the young man for his bravery against the winter cold; but there are some that have been less than thrilled at his reckless behavior. 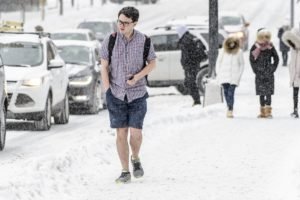 The student was walking around the school’s campus outdoors with temperatures reaching 17 degrees Fahrenheit or minus 8 degrees Celsius. The picture of the student walking on the snow (with heavy snow falling in the background) was shared by the official University of Wisconsin-Madison Twitter page. The tweet read: “Pro tip: *Please* bundle up, #Badgers.“ The Badger refers to the official school mascot of UW-Madison.

The picture has been shared and retweeted several hundred times on social media. It already has more than 1,000 likes and more than 500 retweets. There have also been several funny comments and messages about the young student and his casual attire in what looks like harsh winter weather. Here are some of the tweets with the campaign to find the boy with the hashtag: Â #findtshirtandshortsboy. 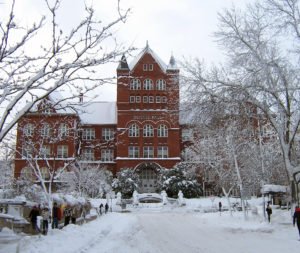 “(Dave Attenborough voice) And here we have an example of the Wisconsin male; attempting to woo a mate by showing off his calves and his endurance in the harsh, Wisconsin winter.

“The 2018 Winter Olympics opening ceremony took place on Friday in Pyeongchang, South Korea, and the delegation from Bermuda wore shorts in 20-degree weather.”

“Not sure when this photo was taken, but the same boy was on the 80 with me this morning again in a t-shirt and shorts. I’d love to know his reasoning! #findtshirtandshortsboy”