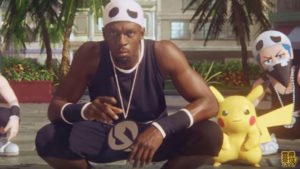 Usain Bolt, also known as the world’s fastest man, is now facing a new opponent; Pikachu! The Jamaican runner can be seen in the newest Japanese ad for a brand new video game series for the Nintendo 3DS. In the Ad, Bolt is a member of the villainous Skill Team as he faces the most popular Pokemon, Pikachu. The commercial ads are for Nintendo’s 3DS’s new game Pokemon Sun and Moon. Bolt can also be seen posing in his signature Bolt Pose with Pokemon and other members of the Skull Team. The TV ad has been aired in Japan since November of last year but has recently gone viral.

In the past year, Pokemon has emerged as one of the most played games, especially on mobile devices. This is mainly due to the Pokemon GO mobile game phenomenon, which has had a worldwide following. Nintendo DS intends to capitalize on this popularity by releasing this new game called Pokemon Sun and Moon. The Pokemon Sun and Moon series is a seventh generation RPG game wherein players get to capture and train their own Pokemon and battle against other trainers. The game was released worldwide last year to coincide with the 20th anniversary of the Pokemon Franchise.

“Even in a Pokemon battle, I’m number one!” – Usain Bolt

Usain Bolt has been busy travelling the world this past year. The Kingston Jamaican native announced earlier this year that in 2017 he would be retiring from all athletic competition. With all the free time he has, expect more TV ads and viral content from the Gold medal Runner. The 8-time Olympic Gold medalist has had a illustrious career with several achievements and world records. Bolt is widely regarded as the greatest sprinter ever because of this unparalleled success in the sport of track and field.