Hiker Reunites with Dog he had to Leave Behind

It was a cold Friday morning in Southern California when the 62-year old Warren Muldoon decided to hike the Mount San Antonio, also known as Mount Baldy, with his dog Dakota. They had managed to summit the mountain, but got lost on the way down. Muldoon got separated from his dog after falling and getting injured. Luckily, hikers on the hiking trail were able to find him and evacuate him. To Muldoon’s dismay, they weren’t able to find Dakota, who was stuck on a snowy ledge higher up the trail. 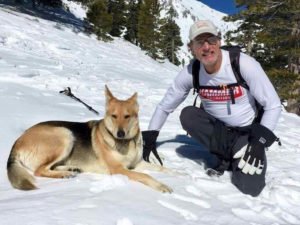 The Muldoon’s dog was more than just a pet. After their son was critically injured in a motorcycle accident, he asked his parents to look after his German Shepherd mix pet. This was why Muldoon and his wife was devastated when Dakota could not be rescued. Warren’s wife, Connie took to social media to share this heartbreaking incident.

That’s when a group of hikers, after reading about Dakota on Connie’s social media post, decided to put it upon themselves to find the lost dog. It took a lot of hard work and dedication with searching to find her, but they were eventually able to find the ledge where she was stuck. They lured her over with a piece of Salami and were able to carry her back down the mountain. Muldoon, after recovering from his injuring, was eventually able to reunite with his beloved Dakota in an emotional and tearful reunion at the hospital.