Unified light-heavyweight world champion Andre Ward announced earlier today that he will be retiring from the sport of boxing. The 33-year old American was undefeated in his career with 32 wins, 16 by way of knockout. Ward held titles at super-middleweight as well as unified the titles of the WBA, IBF, and WBO light-heavyweight belts. He was ranked as the best active pound-for-pound fighter in the world by most boxing magazines and websites. 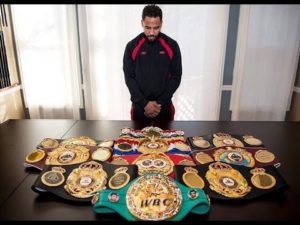 Ward announced that he would be retiring from boxing because his body could no longer take the rigors of boxing. His last fight was a rematch against Sergey Kovalev in Las Vegas to defend the titles he had unified seven months earlier. Earlier this week, Ward posted pictures of all the title belts he won during his career.

“If I cannot give my family, my team, and the fans everything I have, then I should no longer be fighting,” said Ward on his social media account, “To the sport of boxing – I love you. You’ve been by my side since I was 10 years old. You’ve taught me so much. You’ve humbled me. You’ve promoted me. As I walk away from the sport of boxing today, I leave at the top of your glorious mountain, which was always my vision and my dream. I did it. We did it.” 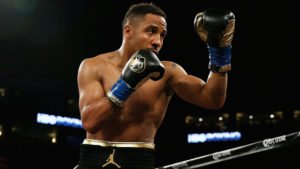 Ward won the 2004 Olympic gold medal before turning professional. It took him five years to win his first title, but he has never looked back and he never lost a fight in 32 bouts. His closest loss was against Kovalev in their first fight, but he vindicated that win by knocking out the Russian in their rematch earlier this year.