Two Men Overcome Personal Struggles to Help other with their Limits

Two men have lead very different lives, but tragic events have led them to meet each other in a way that could touch and improve the lives of hundreds, possibly even thousands of people. David Yobora was a former professional football player that shifted his career as a personal trainer when a injury cut his football career short. Despite a new career he found himself addicted to painkillers and shortly checked himself into a rehab clinic. Travis Mills was a war veteran when he lost all four limbs after being blown up in a tour in Afghanistan. Mills is only one of five living quadruple amputees. 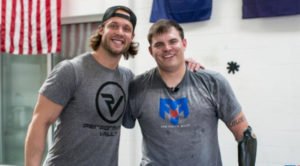 It was then that Mills met Yobora in a strange twist of fate. At first the pair just started working together, with the physical trainer helping the amputee deal with his limitations, and the former soldier providing Yobora with a purpose in life. But after a few sessions, and more than a few hours of talking, they both realized that they had a passion about helping other people that suffered from the same disabilities that Mills had. They wanted to help other people in the same way that they helped each other. That’s when they founded the Adaptive Training Foundation. Through this foundation, they are able to help civilians and injured soldiers deal with their disabilities and live a normal life.

According to the Foundation: “Through working with each other and engaging the veteran community, specifically those that were severely injured, we developed a passion for helping those with life-altering injuries find a path to life-fulfilling activity and fitness through adaptive performance training.”