Holden has light skin, blonde hair, and blue eyes, while his brother Hayden has a darker skin tone, brown eyes and dark hair. Despite looking completely different, Holden and Hayden are brothers. In fact, these two are twins. Most people are shocked to find out that these two are closely related, never mind the fact that they are even twins. 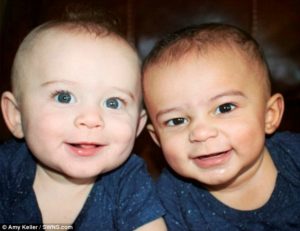 The brothers are the children of an interracial couple from Spring, Texas. Their dad is African-American, while their mom, Amy Keller, is Caucasian with Scandinavian and German descent. The two boys are just 15 months old, but they have already gotten so much attention for being the most un-identical twins in recent memory. The two boys were born prematurely at 29 weeks, and because they were hooked up to machines, their mother didn’t even notice that they were not identical until three days after their birth. 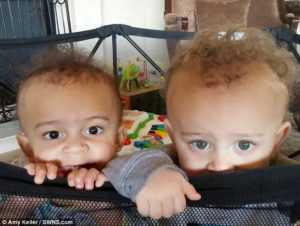 “As they’ve gotten older, their differences are so striking sometimes people don’t even believe they are brothers,” Keller said, “Hayden is completely fearless, he is a little daredevil. He’s the first one to leap off the couch and jibber jabber to anyone who will listen; he’s so outgoing. Holden is a little mommy’s boy. He’s a bit shy and really cautious. He’s definitely the follower.”

“They have no awareness that they are any different than each other now,” Keller said. “I do know there will come a time when I will have to have a talk with Hayden. When the time comes, I will just explain to him that Holden and him are brothers, and nothing can change that.”