There is a special connection between twins. It’s a stronger bond and link than with ordinary siblings. Some would even say that the connection is there even if the twins do not grow up together. Such is the case with the Jim Twins. These two twins were separated at birth and lived totally separate lives, but the similarities of their lives are uncanny, some would even say unbelievable. 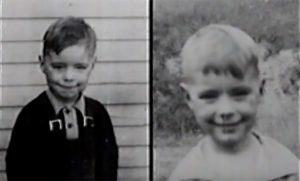 Identical twins Jim Lewis and Jim Springer were separated when they were just four weeks old. They were adopted by different families. They both led different lives not knowing that they had a twin. It took them 39 years before they found out about each other and decided to meet. When getting to know each other, they discovered that they lived almost identical lives.

“If someone had come to me with results like (these astoundingly similar traits of twins) I wouldn’t have believed them,” said scientist Thomas Bouchard, who conducted the case study. Among the many similarities includes the fact that both had been adopted in Ohio, they were obviously both named Jim, and they both attended the same schools. But that could all be coincidental. 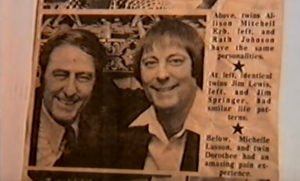 These were incredible similarities, but throughout all that, they also had many differences. The most stark difference is in their looks. One twin wore it straight and combed down on his forehead, while the other combed it back with sideburns. This made them look so much different together.