Two 7-month old twins have been trending in social media the past few weeks. Aside from the fact that these twins are adorable, what has captured the attention of a lot of people has been the fact they have different skin color. Because of this odd and rare coincidence, they twins and their mother’s Instagram account have become internet sensations. 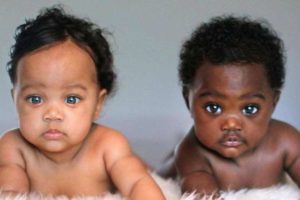 The twins are Isabella and Gabriella Shipley. They are fraternal twins and they are not identical, which is why they do not look alike. But their differences are much more than likeliness; they also have different skin color. According to the mother of the twins, Clementine Shipley, they have received a lot of interest from their posts. Despite just being a few months old, the account has already picked up over 13,000 followers. 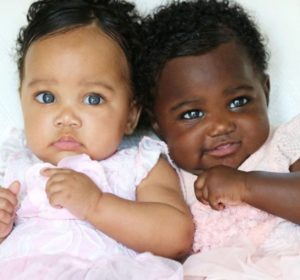 “From time to time we’ve ran into negative comments about Gabriella’s color, if she’s loved and if she considered beautiful because of her darker complexion,” said Clementine. But she has assured them that both babies are loved and are considered to be beautiful. There is also a lot of people that have mistakenly assumed that the twins are mixed-race. Clementine is quick to point out that both are in fact “African-America”, and that lighter skin and grey eyes runs in the family.

Aside from the twins, Shipley also has an older third child, Angelina. Angelina is two years old and is also featured on her mother’s popular Instagram account. Shipley says that Angelina is a wonderful big sister to her two younger siblings. In fact, she thinks the different skin colors make them unique and one of a kind.