In California, a set of twins were born just a few minutes apart on the same day. But they were born in different years. This is because the older twin was born on 11:58 of December 31 of 2017 while the younger sibling was born 12:16 am on January 1 of 2018. So while the twins are separated by mere minutes their birth certificates will have different years. 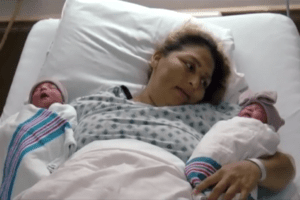 Maria Esperanza Flores Rios went into labor on New Year’s Eve at around 7 pm. She wasn’t expecting to give birth on the eve of the New Year and it was a shock when her water broke and she was sent to the Delano Regional Medical Center. Her twins were born around midnight, with Joaquin being born just before the New Year, and Aitana being born a little past midnight. Not only were the twins born on different months, but they were also born on different years.

Maria was originally due on January 27 and then was scheduled for a caesarean operation on January 10. Despite being ahead of schedule, both babies were born safe and they have already garnered some fame in their early lives because of the special circumstances. The Medical center also celebrated the twin babies and they were the last baby to be born in Kern County in 2017, and the first baby born in the County for 2018.

Maria and her husband Joaquin are both farm laborers, and they have three other daughters ranging from 6 years old to 18 years old. According to reports, the odds of twins being born in different years are around one in 60,000.