Snowy Owl Survives Being Hit and Trapped inside SUV Grill

Earlier this week in Regina, Saskatchewan, the director of wildlife rehabilitation center Salthaven West, Megan Lawrence, responded to a report of a snowy owl that was hit by a vehicle. It seems that the bird was hit by a moving SUV, and to make things worse, the owl went through and was now stuck inside the grill of the car. While things were critical at the start, the owl has since improved and is expected to make a full recovery. 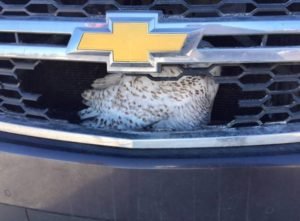 “We often receive calls about animals that are hit by vehicles on highways,” said Lawrence, “however Thursday’s call was quite a bit different! Realizing she had hit an owl and assuming the worst for the bird, Felecia continued the few minutes into Regina and stopped shortly after to see if there was any damage to her truck. There was damage alright – and a Snowy Owl to prove it!” 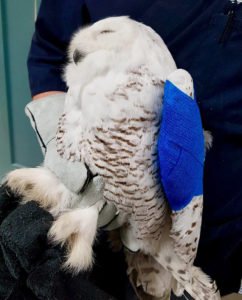 The owl, which was named Tahoe, was taken into the Animal Clinic of Regina, where it was bandaged and given medication to help with the pain. The young male own will be recovering for at least six weeks at the center as his bones and wings heals and he stabilizes enough to fly by himself. Before being released, he will be given test flights to make sure that he is strong and not suffering from vision damage from the concussion.

“The first 48 hours are critical for most patients and the Snowy was touch-and-go due to the severe concussion, but is making excellent progress so far,” Lawrence said.