It was a routine traffic stop in downtown Manhattan. The police had spotted suspicious behavior from a pair driving a Range Rover down the street. Usually suspicious behavior is only called in and they do not usually require police officers to stop the vehicle, but this was a special case. It was suspicious because the Range Rover was only a foot tall, and the passengers were two-year old twin boys. 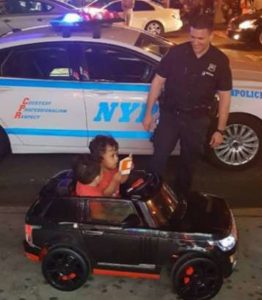 Aaron and Evan were taking their usual night drive down their neighborhood road when they were pulled over. But it wasn’t a really trouble. As it turned out the two police officers had spotted them a few minutes before and asked their dad, Alex about the car and the boys. That’s when he asked to have a picture taken with the police officers, possibly even pretending to give the two boys traffic tickets. 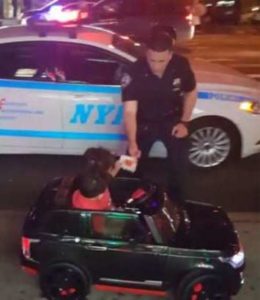 But the two police officers pulled out all the stops. They turned the lights on their squad car and even turned on the siren a few times to get the attention of the two little boys. The twins didn’t seem to be in on the joke and they were very serious in answering the questions that the officers had asked of them. According to their Alex “They’re in total shock, they didn’t know what was going on, especially with the lights and everybody looking at them.” According to Alex, the violation given to the twins was exceeding cuteness. Thankfully, both Evan and Aaron were let go with a warning.