It’s never too early to teach our kids how to be good citizens, as was the case with this father and son duo. In Massachusetts, the Arlington Police department awarded 6-year old Jasper Dopman and his father Eric, with an Outstanding Citizen’s Award for turning in a bank bag that had belonged to a family-owned restaurant. According to the police, the bag had over $2000 in cash and deposit slips to a local bank. 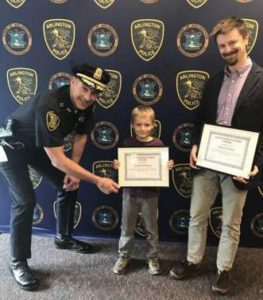 The police stated that Jasper and his father were walking down the street when they spotted a bag on the ground. Jasper pointed the bag out to his dad. That’s when he and his dad decided to call the Arlington Police Department to turn it in. The police contacted the bank that was the slips who then led them to an employee at Tenoch Mexican Food Corp. According to the employee, she had lost the bag earlier in the day. After a week, both Jasper and Erik were invited to visit the Arlington Police Department, where they were thanked by the restaurant owner, Alvaro Sandoval. They were also awarded the Outstanding Citizen’s Award. 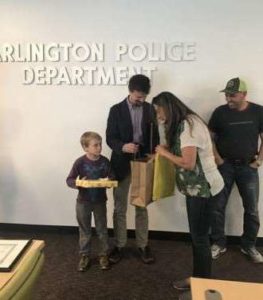 “Erik imparted an extremely valuable lesson on his son,” said Arlington Chief Ryan said. “It is hard to imagine the panic and fear that sets in when someone loses a large amount of money for their employer. Jasper and Erik did the right thing, and I commend their actions in returning the missing money.” Pictures of the father and son were then taken and spread through social media.