Twin Sisters Have Babies on the Same Day

Twins Danielle Grant and Kim Abraham were born in the same minute. As they grew up, they did what most twins do, including wearing matching clothes, attending the same schools, and eventually living in the same city, their home town of Toms River. But now, at 32 years of age, the twins have managed to do something together that no other pair of twinsÂ would have thought possible, even for these two close sisters. Danielle and Kim both gave birth to baby boys at the same hospital, on the same day. 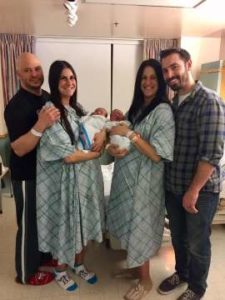 The birth of their sons occurred on April 22. Both mothers had to be induced after their matching due dates. Danielle named her son Roman, and Kim named hers Aaron. This was Kim’s first child, while Danielle already has a 2-year old daughter. According to a mathematics professor, the odds of the twins giving birth on the same day are 8 in 100,000. This rare occurrence is made even rarer because of the fact that both are male. This adjusts their odds at 4 in 100,000. This means that there is a better chance of someone getting hit by lightning. 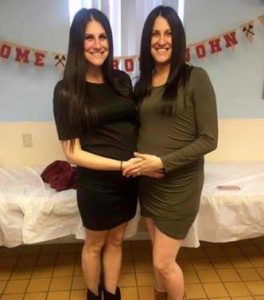 “Total coincidence,” Danielle said. “We both wanted babies, but we didn’t think we would get pregnant the same time. This was not planned.” They wanted to make it clear to everyone that this was not intentional, and that they did not plan their families like that. “We just kept one-upping the coincidences.” said Kim. “It’s the best thing in the world. We’re real close and our husbands are real close. The boys will be like brothers.”