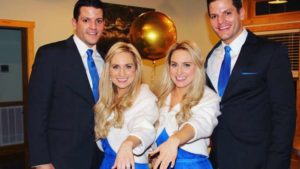 These two pair of twins met at the Twins Days Festival in Twinsburg, Ohio last year. Briana took to Jeremy, and Brittany got together with Josh. After months of dating, the two brothers decided they wanted to propose and they even found the perfect location for it, in Twin Lakes, Virginia. Now this foursome is heading down the aisle in what may be the most unlikely of pairings. 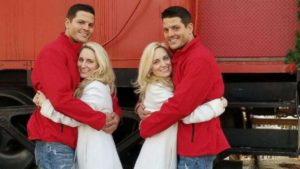 “We saw them from afar and we thought they were just the most handsome guys,” one of the sisters said about the Salyers brothers. When the sisters headed to Twin lakes, they thought they were there to take part in a commercial about the place and its association with twins. But when they got there, they saw the brothers in matching blue suits and ties. The brothers filmed several shots for the “commercial” but on the final scene, the couple headed to a pavilion with a fireplace with rose petals and candles.

That’s when both brothers got down on one knee and showed the sisters the rings. The families of both siblings drove out to celebrate the occasion. The foursome plans to get married at the same Twins Festival where they met last year.