A sunken ship off the coast of the Greek island of Antikythera was recently discovered to contain treasures from an ancient era. The sunken wreck has provided Greek researchers with priceless baubles that are more than 2,000 years old. The shipwreck was once a Roman-era sea vessel that was full of luxury goods and priceless art. 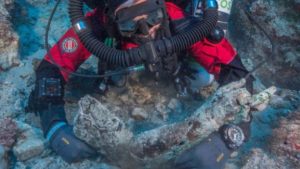 A team from the Ephorate of Underwater Antiquities continued to excavate a trench where human remains were discovered last year. They found that the trench held so many more treasures such as a bronze arm of a statue and a disc adorned with a bull. Also discovered were the preserved remains of the ship’s planks that dated back to a time where there are few relics discovered. 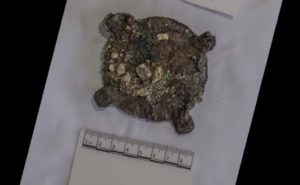 The shipwreck site has been discovered before, but only now has it been explored in detail. The wreckage was first discovered by divers in the 1900’s, and they were able to salvage several relics from the Classical era, including marble statues of ancient gods. Then in 1976, Jacques-Yves Cousteau and the CALYPSO crew surveyed the wreck once again and recovered over 300 objects, including skeletal remains of the crew.

“Say you discovered there are another seven Leonardo [DaVinci] paintings that no one knew existed and the prospect of finding them is dangling before your eyes,” said Kenneth Lapatin, a curator with Los Angeles’ J. Paul Getty museum. “That’s what this is like for classical archaeologists and those who study ancient Greek and Roman art.”