When a woman in Stillwater, Oklahoma turned 107 years old, she said that her only wish for her birthday was to ride in a convertible during a parade. Her home town heard about her birthday wish and made her dream come true. Not only did they get the birthday celebrant a convertible, but they even threw a parade in the middle of the town in her honor. 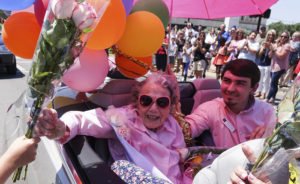 It all started when a nurse asked Mynda Lewis if she had anything she wanted to do for her birthday. She said she wanted to ride in a parade inside a convertible. So the nurse called Lewis’ daughter to ask permission to take her for a ride in a convertible. But it didn’t stop there. Staff at Physician’s Choice Hospice and Westhaven Nursing and Rehabilitation Center also wanted to contribute.

The staff asked people from the town to invite anyone who would like to wave to Mynda as she drove by. Then someone created a Facebook page and by the next morning an event had been organized with more than 800 people indicating they wanted to be involved in a parade. Hundreds of people lined up along Main Street to greet Myda Lewis a happy birthday. 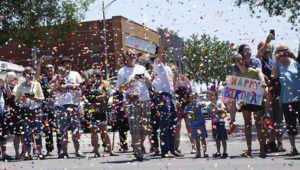 “We’re out today because what a fun thing to celebrate!” said Toni Ivey, who was in the crowd, “I mean, who gets to turn 107? And if she wants to have a parade by golly, we’re going to give her a parade! And we need this positivity in the world right now. Everybody’s smiling today; I don’t see one grumpy face. The whole town has come together.”