Earlier this week, a man was spotted traveling through the Hudson River with a paddle board. What made this strange was the fact that the man was wearing a full suit. The man was 32-year old Scott Holt. According to Holt, he was running late for an interview in New York and he didn’t want to “Splurge on a ferry ride”, so he grabbed his paddle board and crossed the river on it, even in complete attire and shoes. 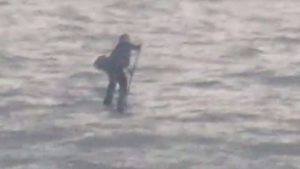 “I actually expected it to take a really long time but it only took like a half hour,” Holt said, “It gave my shoes a free shoe shine and [it was] a free commute.” Among the first people that spotted Holt was Eunice Rivers of Jersey City. She was on the ferry to New York when she saw Holt. She said that everyone that saw him was laughing and were saying ‘What is he doing?’ According to Rivers, she had to record a video of Holt because she was sure no one was going to believe her. 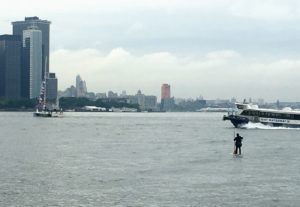 Rivers later uploaded the video on her social media page, where it quickly went viral. Currently, the video has a little over 200,000 views.Â  “I thought it was quite hilarious,” Rivers said. “He was in a suit. He had a briefcase and a bow tie on.” Holt was eventually stopped by police, who gave him a lecture on the dangers of his stunt, but they eventually let him go. Holt also made it in time for his interview with time to spare.