Tortoise Recovered Seven Years After It was Stolen

Earlier this week, the police at Western Australia recovered a Madagascan radiated tortoise that was stolen from the Perth zoo seven years ago. The Madagascan radiated tortoise, also known as Astrochelys radiata, was one of two reptiles that were reported missing from the zoo in 2011. The tortoise was found at a house in Girrawheen by police who were searching the property for unrelated investigation. 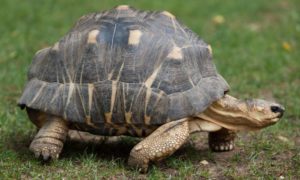 “It is believed the second tortoise was taken from the Girrawheen home on the same day police attended and there are concerns for the welfare of that tortoise,” a police statement said. “To survive, these tortoises require special diets and living areas, completely different to the needs of a tortoise purchased at a pet store.”

Police have also called for anyone with anyone with any information about the whereabouts of the second tortoise. Radiated tortoises are very valued by wildlife smugglers. They have been poached to the point of extinction in their native Madagascar. The wild population has decreased from 6.5 million to 3 million in the past five years.

“I am told that they require constant care so for them to have been removed from the zoo and to have lived for seven years really is amazing,” said Stephen Dawson, the Western Australia’s environment minister, Â “Notwithstanding that, the best place for them to be kept in Australia is in a zoo. These aren’t family pets, they are endangered animals and we need to look after them.” Dawson was also very hopeful that the second missing tortoise would be recovered soon.