Topless Tongan Athlete has Secret Weapon Against the Cold

The flag bearer for Tonga made quite an impression during the XXIII Olympic Winter Games at Pyeongchang, South Korea. Despite the freezing temperatures experienced during the opening ceremonies, Pita Taugatofua made his way across the Pyeongchang stadium completely topless. But he made it through the winter climate thanks to a secret weapon against the cold. 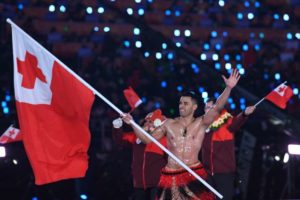 The Tongan flag bearer brought with him a secret that has been used in his home country to battle cold temperatures: coconut oil. By rubbing the oil on his naked upper body, he was able to resist the freezing temperatures of Peyongchang. It was reported that the temperature around the event reached a freezing minus 1- degrees Celsius (14 degrees Fahrenheit).Â  Pita made his way across the field wearing the traditional Tongan skirt and sandals with nothing on his upper body.

“Pita secretly brought his tiny bottle of coconut oil in his pocket,” said Louise Waterhouse, Tonga’s Honorary Consul in Sydney, “And just before Tonga’s marching time, when the march organizers saw what Pita was doing, they were then so helpful and even gave him a little side room to keep warm immediately before the entrance to the stadium!” Coconut oil is traditionally used in Tonga to ward of cold. 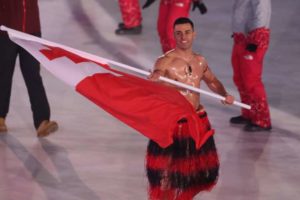 “Pita’s honorary coach Thomas Jacob had his jacket in his back pack — ready to put on in the stands,” said Waterhouse, who is supporting Team Tonga in Pyeongchang. “But Pita said to me afterwards at the athlete’s village: ‘I wasn’t cold walking — the coconut oil kept me warm. It was only once I was seated that I became cold.'”