In Bunol, Spain, more than 20,000 locals and visitors participated in the annual tomato throwing festival, also known as the Tomatina. Thousands threw more than 160 tons of over-ripe tomatoes at each other, painting the small town new Valencia with a bright shade of red. The festivities continued despite the high security in the area in response to recent terror attacks in the country. 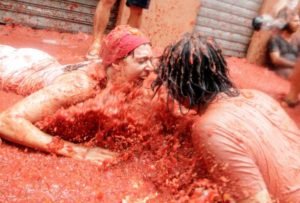 The annual tomato throwing festival attracts tourists from all over the world to participate in one of the largest food fight festivals. The streets of this small town are often a few inches deep in liquid tomato pulps. The messy tomato battle occurs in the same time, the last Wednesday of August each year. There was a reported 20,000 revelers from all over the world that participated in this messy festival this year. The first Tomatina festival occurred at Bunol in 1945, when locals of the small town spontaneously started throwing ripe tomatoes at each other. 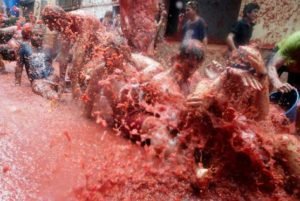 The security at the event included police and safety personnel. There was also added security from the national guard that monitored the events at the festival. These security measures were put in place, not just at the Tomatina festival, but in most national Spanish festivals all over the country. Despite the heightened security, the festivities were still a success.

“I’m not really that worried,” said one Tomatina participant, Tess Papadopoulos. “There’s lots of security around so I feel really safe.” Papadopoulos had traveled all the way from Australia to participate in the Tomatina festival.