In Tarrentz, Austria, a brewery named Schloss Starkenberger is offering the world’s very first beer swimming pools. The brewery has seven pools full of beer, each 13 feet long. The pools are full of 100% pure beer, and the combined pools make up around 42,000 pints of the beverage. Customers can visit the brewery and swim in the pools for £200 each two-hour session. 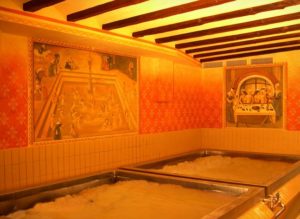 Aside from enjoying the aroma of the beer, the calcium and the vitamins in the beer are said to soften the skin. The beer is also said to increase blood circulation. Visitors are also welcome to drink beer in fresh glasses while bathing in the pool but they are warned not to drink the beer in the pool because of the number of people that have dipped their sweaty bodies in the pools. Aside from the pools, the brewery also offers many different kinds of beers to their customers. In fact, they carry 13 different beers in-house.

The pools are located in the cellar of the Starkenberger Castle, which is more than 700 years old. The castle is where the brewery operates and they have several fermentation rooms located in the building. The pools were made in 2005 when the beer vats in the cellar became obsolete. The owners used them instead to create beer pools for people to swim in. They even hired an artist to modify the vats in the old fermentation rooms to make them more accommodating. The beer pools have been a popular attraction for tourists and travelers ever since.