Toddler Runs In Wrestling Match to Save Sister

Most siblings know that brothers are there to tease and torment their sisters. But it is also an unsaid rule that they would do anything to protect them. This was shown in a recent viral video that showed an adorable two-year old run into a wrestling match at school to protect his older sister. Apparently, the toddler thought that the match was real and ran in to break up the fight. 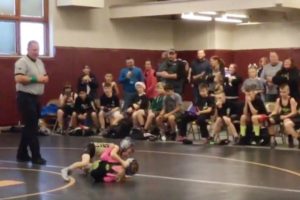 The 2-year old toddler thought that his sister Ruby was in a real fight against Ryan, and he rushed into the wrestling mat to break up the fight. He even started to drag Ryan away from Ruby before the referee stepped in and broke up the commotion. Nobody was more amused than Ryan’s mother, Torri Prendergast. She shared the video earlier this week where it quickly made the rounds and went viral. 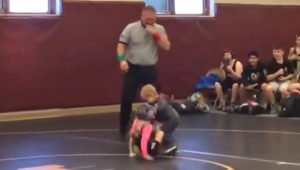 “When the girl you’re wrestling has a tough little brother, don’t mess with his sister…..you won’t regret watching this video, promise.” wrote Torri on her post. Prendergast said that she missed the wrestling match because of work, but luckily, her husband was there to capture the entire incident on camera. When she saw the footage, she knew she had to share it online.

Almost everyone was moved by the toddler’s motive to protect his sister even against an older and bigger opponent. The whole place was laughing at the incident, especially when the young boy started to scream “That’s my sister!” at her opponent. When the boy was returned to his parents, the match resumed.