Last Friday, Winnie the wombat celebrated her 31st birthday at the National Zoo and Aquarium in Australia. This occasion made him officially the oldest wombat in the entire continent, and most probably the oldest one in the planet. To celebrate this milestone, Winnie was given two cakes, one that was made out of special fruit and another that was made up of vegetables. 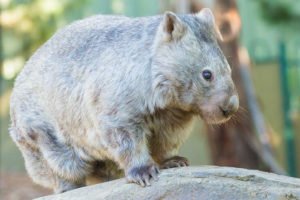 Winnie was orphaned as a joey, but he was rescued by the Birdland Animal Park. Soon he was transferred to the National Zoo in 1992, where he has been ever since. Wombats usually live to around 20 years old in captivity and to around 15 years old in the wild. Despite his old age, Winnie is said to be still quite active and playful.

“She’s a happy little wombat who loves her food and back scratches,” zoo keeper Danielle Johinke said. According to Johinke, Winnie is actually one of the favorite animals of the staff that works at the National Zoo. But Winnie is more than just popular at her Zoo, she is also somewhat of an online celebrity. Winnie has more than 1,700 followers on her Facebook page, and she even has fans from all over the world visit her. 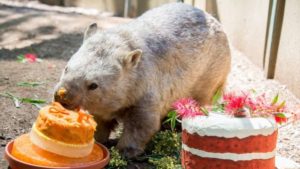 Winnie received several greetings from her visitors in the zoo, but she was also greeted on her social media accounts. Wombats are short legged marsupials that are endemic in Australia. Meaning they can only be found in the island continent. They are herbivores and prefer to eat grass, herbs, roots, and fruits. The most distinct characteristic of the wombat is their feces which are shaped like a cube.