Earlier this week, an emu escaped from its farm and ran through the snow covered streets of a village in Essex. The Emu has since been returned to its home, but not before a few villagers snapped pictures of the large bird running around town. It was still not clear how the emu had managed to escape and where it was supposedly going. 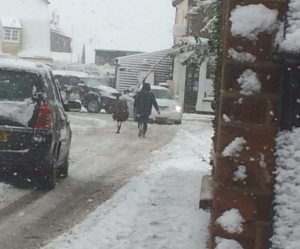 The emu was living in a farm in Tollesbury, a small village near the coast in Essex. It was first spotted running through the main street of the town and then later on in a graveyard. It was at the graveyard where the emu was chased down and eventually placed in a headlock and taken back home. There were a lot of villagers that were shocked to see such a large bird running through town. 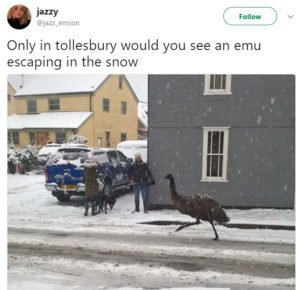 “We were all preparing to go out in the snow and suddenly I saw it run past me â€” we were all a bit shocked,” said Jasmin Emson , a resident of Essex. Emus are the second largest bird on earth, next to the ostrich. Emus also resemble ostriches in that they are large flightless birds with long necks and long legs. Emus can travel to speeds of up to 40 kilometers per hour.

Emus are farmed for their meat, although it also has several other purposes. The bird can also be used for its leather, feathers and oil. 95% of an emu carcass can be used, making it one of the most productive farm animals to have.