Boy Locks Himself in Safe Playing Hide and Seek

Earlier this week, a 9-year old boy was playing hide and seek with his little brother in Lichterfelde, Berlin, when he managed to find the best hiding spot. The spot was a steel lock safe but the boy inadvertently closed the door and locked himself inside it. In a few hours the parents of the boys were alerted to the situation, and they immediately called the authorities. 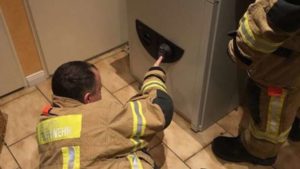 The boys were playing in their grandfather’s house, who also owned the safe. Unfortunately, their grandfather was away and only he knew the password to open the safe. The fire brigade was called in to open the safe and get the little boy out. Oxygen had to be pumped into the safe with a small plastic tube so that the little boy would not suffocate.

It took three hours of testing the safe for possible pass codes. The parents tested family birth dates in hopes of guessing the right code, all while oxygen was being fed through a tiny crack in the safe. Just as a special team was about to start with breaking open the safe, the correct six-digit pass code was entered in. 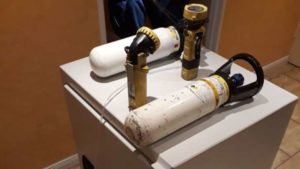 According to the firemen, the little boy was very brave and remained calm throughout the entire thing. They said he was shocked from the entire ordeal was otherwise unharmed. They said it was lucky that they were able to guess the correct pass code as it would have been very tricky cracking open a small safe with a little boy still inside it.