Earlier this week a toddler was locked in a car and had to be rescued by firefighters and rescue operators. What was odd was that the 14 month old child seemed to be enjoying the experience of being rescued from his predicament. Pictures of the smiling toddler have made their way to social media. The picture shows the smiling toddler surrounded by rescue personnelÂ as they try to get the baby’s attention and find a way to get in the vehicle or get him out. 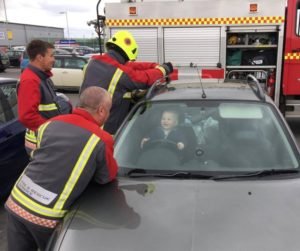 The baby, named Brandon, was accidentally locked in a Rover when her mom, Kristy Green’s Â placed the baby in the car and returned outside to get the groceries, which she had left by the car door. Brandon then pushed down the locks, locking him inside the vehicle. When Green tried to get back in, she realized that she had left the keys inside the car with the baby. That’s when she decided to call emergency services to help. 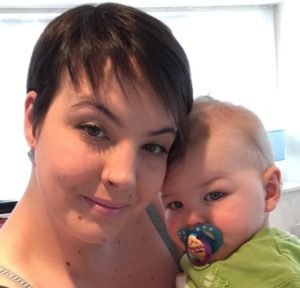 “He’d been in the little child seat of the shopping trolley but it didn’t have any straps, so he kept trying to stand up while I was shopping,” said the 27-year-old mom. “I decided to put him in the back of the car while I was unloading the shopping so he didn’t keep trying to stand up in the trolley.” They were still trying to find a way to get inside the car when little Brandon got hold of some coins and put it in his mouth. Rather than risk the baby choking on the coins, the emergency services decided to smash the rear window and get Brandon back safely to his mother.