Old Woman Asks Neighbor To Be Her Friend

Earlier this week, when Marleen Brooks came back to her San Francisco home, she found a heartwarming note stuck to her door, from one of her neighbors. It turns out the letter was from a neighbor that lived down the street named Wanda. Wanda is 90-year old retired woman who lives alone. The letter asked Brooks if she wanted to be friends. The letter read: “Would you consider to become my friend. I’m 90 years old- live alone. All my friends have passed away. I’m so lonesome and scared. Please I pray for someone.” 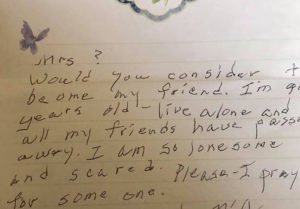 Wanda was worried that she would think her idea was stupid or that she might scare Marleen away, but Marleen reassured her that it was a very nice thing to do and they she was available for her when she needs the company. As it turns out, Wanda has three sons, but one passed away last year from cancer, and the other two are too far away to spend time with her. Wanda is also on oxygen and suffers from congestive heart failure and osteoporosis, which makes it difficult for her to go out and meet people. 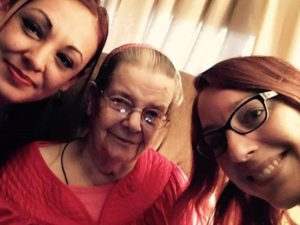 According to Marleen, she was touched by the gesture and wanted to spend as much time as she could with her neighbor. Marleen even reassured Wanda that she would be available any time and that she could call her to spend time with each other. Marleen said this was the start of some great times that she would be spending with her new friend. Her only regret was that she was only able to make cupcakes and did not have enough time to make Wanda some of her world famous banana bread.