Tim Tebow was playing baseball for the St. Lucie Mets against the Charlotte Stone Crabs at Charlotte Sports Park when he first met Seth Bosch. Tebow was on the on deck circle getting ready to step up to the plate when he heard little Seth calling his name. So he went over and shook his hand. A few minutes later, Tebow stepped up to the plate and hit a home run. The whole thing was captured by Seth’s mother Ileanna on video. 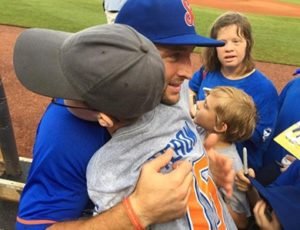 The encounter started when 9-year old Seth was looking to get the attention of Tebow, one of his favorite players, from the stands. Seth has autism and hasneurofibromatosis, a genetic disorder that produces tumors on the nerve tissue. Seth started waving at Tebow, who was taking a few practice swings at the on deck circle. To everyone surprise, the star walked over and shook Seth’s hand through the netting. After the encounter, Seth returned to his seat and his parents with tears of joy.Â What happened next was also a surprise as Tebow stepped up to the plate and hit a three-run home run for his team. 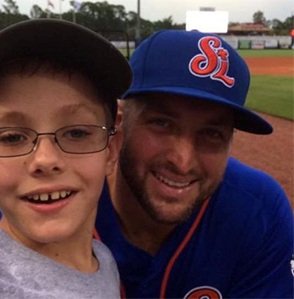 After the game, Tebow and Seth met again, where Ileanna took photos of the two together. Tim Tebow was a former professional football quarterback, where he had stints for the Denver Broncos and the New York Jets. He is currently playing for the New York Mets organization trying his hand on a professional baseball career.

“When Seth came back to his seat, he was crying,” said Ileanna told the Tampa Bay Times. “And then Tim hit the homer. I started crying, too. How does that happen? I think God brought Seth and Tim together.”