In Estes Park, Colorado, surveillance video of a local pizza shop shows three bears breaking into the pizzeria and ransacking the place for food. It seems that bears don’t just break into houses for porridge, but they actually prefer pizza dough and salami. Those were the food items that were eaten by the mother bear and her two cubs as they broke into the pizza restaurant. 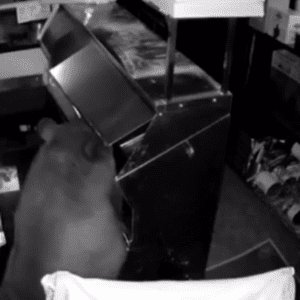 According to the co-owner of Antonio’s New York Pizza, the bears broke into the main widow located at the front of the restaurant. They rummaged the outer room for good, taking bites out of several trays of pizza dough and large chunks of salami, before exiting through the same window. Workers at the restaurant threw away several trays of pizza, sanitized the area and restocked their stores. Thankfully, most of the food used by the restaurant was kept in another room that the bears were unable to access. 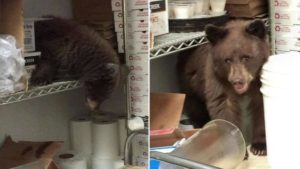 “A note to police for the future: if bears break into our stores, please don’t shoot them. Every dumpster in town is now bear proof which leaves only our homes, cars and businesses,” the pizzeria said on its social media account. According to wildlife experts, this is the time the bears will be foraging and hunting for food before they hibernate for the winter.

“While I don’t advocate feeding wildlife in any way, I believe it would have been much better to have left the old dumpster tops in place because they wouldn’t become desperate enough to break into houses or businesses and the damage in dollars would be much lower,” the post said. “This could have been so much worse.”