During Nevada’s annual Burning Man Festival, thousands of people flock to the desert to participate in the event. Most people take rides, but there are a significant amount of people who ride bikes out to the event and then leave them behind after the festival. Over the years there have been a lot of bicycles collected from the event, more than 5,000. These were all scheduled to be scrapped, until an idea occurred to a pair of Good Samaritans. 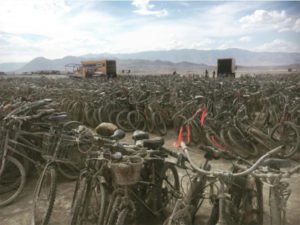 Matthew Rockwell is the founder of a charity start-up called Disaster Hack. He came up with the idea to recycle the bikes for the people that had lost their cars and vehicles during Hurricane Harvey and Hurricane Irma. Rockwell went through the pile and gathered around 500 bikes. The idea also came across Meg Kiihne, who used to run a bike shop on Turks and Caicos. She knew that bicycles could be very useful in the recovery from disasters like the hurricanes. Kiihne rented a truck and a storage unit and also recovered more than 100 bikes.

“Bikes can enable somebody who may have lost their home and staying with a friend, they can get to their job at a resort so they can continue to make money to help rebuild their home. They can get around on a bike and get to food,” said Kiihne. When all the bikes were cleaned and fixed, they were picked up to be shipped to the cities that were hit the hardest. The transportation of the bikes was paid for by a GoFundMe page.