When it comes to weddings, one of the most important aspects of the entire ceremony is the wedding dress. Getting married without a wedding dress is considered a disaster. Nathalie Lout almost found that out the hard way when she was without a gown just minutes before her big day. But thanks to a pair of amazing dressmakers, they were able to prevent a catastrophe from happening. 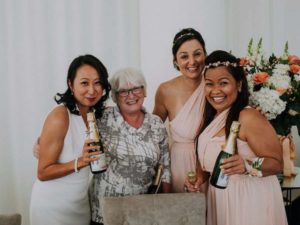 “I still don’t know what happened to my original dress,” Lout said. “I had my final fitting about 10 days earlier and was told that the dress would be ready on either the Thursday or Friday before the wedding and that they would contact me when it was ready.”

It was less than an hour before the actual ceremony when wedding photographer Lizzie Adams arrived at the venue only to find Lout without a dress. Lout was planning to wear a plain white slip as her gown. But Adams had a plan. She called Courtyard Boutique, which was a small business run by Rhiannon and Anne Moore. In just a few minutes, the mother and daughter team quickly got to work. 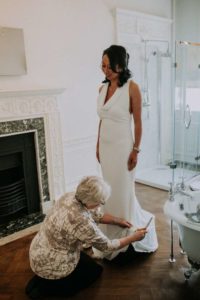 “We got as many details as possible regarding the bride’s figure and height and then found all the designer sample gowns we had which would work on her petite frame and a few accessories to compliment them, popped them in a bag, got all our sewing equipment together and bundled into the car,” Anne said. They finished the dress with alternations at half an hour past 11. The bride was a little late but she didn’t mind because the dress came out spectacularly.

“The dress was incredible and such a difference to what I thought I was going to have to wear. While I tried to stay calm â€“ I did break down in tears when I first saw it,” said Lout “So many people told me I looked ‘stunning’ and they could not believe that it was not the original dress as it looked perfect on me.”