This Toddler’s Favorite Toy is a “Creepy William Shakespeare Doll”

It’s no secret that kids end up doing the most questionable things. But, when this mom’s 20-month-old daughter randomly got attached to a “creepy” William Shakespeare toy, she didn’t know what to think.

My daughter was given this creepy William Shakespeare doll and it has become her favourite toy. She cuddles “Shayspar” at night, brushes his gross old man hair & puts him on the potty. Do I just embrace this? Do I hide him before their bond is unbreakable? pic.twitter.com/MKkYWgISfr

Her daughter got the doll as a Christmas present last year and only recently took a liking to him.

“She’s got all these cute stuffed monkeys and bunnies and an Elmo toy, but for some reason, it’s ‘Shayspar’ who’s really captured her imagination,” she said.

Apparently, the toddler and “Shayspar,” as she calls him, take daily strolls around the house, eat their meals together, and sleep together at night. She’s even in the process of taking him through her potty training adventure. 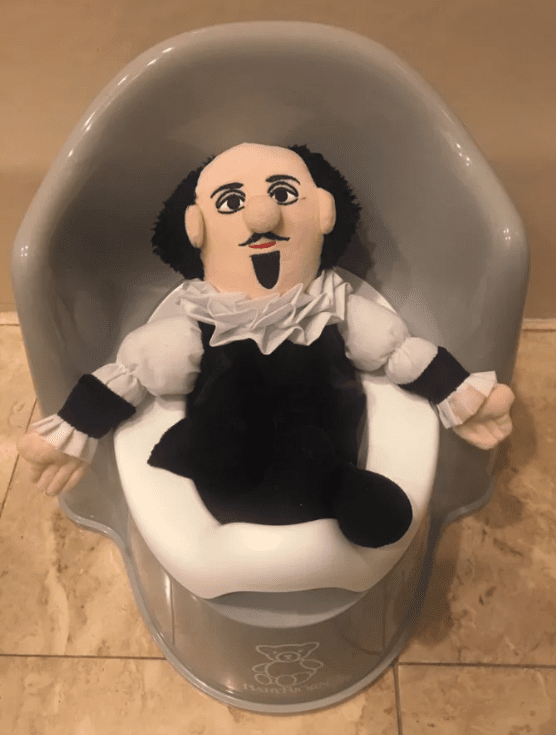 “She likes to put him on the potty quite a bit,” she said. “Which is interesting because I’ve been trying for a long time to get her to sit on the potty, and it’s not happening, but Shakespeare spends a lot of time on the potty.”

She is not interested in having Shayspar around for much longer.Â “I’ve been toying with the idea of getting Shayspar to go on a little vacation in the cupboard for a few months to see if she starts taking interest in her slightly more normal toys,” she said.

Whatever happens to dear Shayspar, we’re glad that this toddler found a friend in the image of a dead poet.