Behan and Jamie Gifford have been sailing around the world for the past 10 years with their three children. And they have no plans of stopping. They started their journey from Puget Sound, Washington in 2008. Their kids were only 4, 6 and 9 years old at the time. Since then they have taken their boat, the Totem, and they have travelled the world. 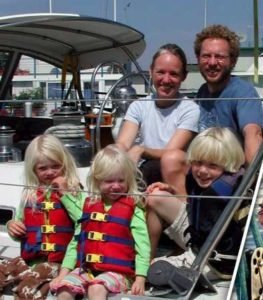 The Giffords have traveled to 48 countries, and have spent through at least $300,000. Their travels have taken close to 60,000 miles circumnavigating the globe. Behan says that she has no regrets and she says that she thinks her family is living the perfect life. The children are now teenagers at 14, 16, and 19, but they are still having fun.

“We had high-paying jobs, dual income,” she explains. “It was so perfect and white picket fence it was almost painful. It makes your teeth hurt.” In 2002, the couple gave birth to their second child and mourned the loss of Jamie’s mom. Jamie’s mother had always wanted to travel and that triggered an idea in him. Years later in 2008, the couple quit their jobs, pulled their kids from school and took off in their boat, which they named Totem. The kids Niall, Marien, and Siobhan, have been “boat-schooled” since then. 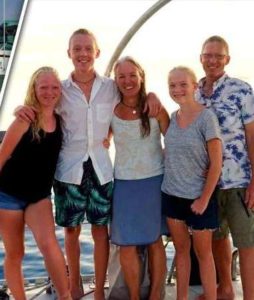 “The kids don’t have mobile phones so there’s no Snapchat or Instagram and they’re ‘not dialed in to popular culture,’ but they spend time relaxing or exploring,” Behan said. They buy what they can carry back from the markets and use the money they have in their savings. They also have freelance jobs and get income from renting out their home in Washington. The family also keeps a blog, SailingTotem.com.