Earlier this month, the world’s first artificially inseminated lions were made public. The lion cubs Isabel and Victor were born at the Ukutula conservation center near Pretoria. The two cubs were born in August and they were deemed healthy and normal. The cubs have been nursing in private the past few weeks and they have only been made public earlier this month. 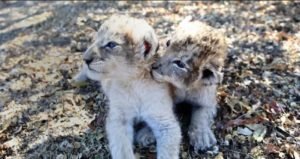 “These are the first ever lion cubs to be born by means of artificial insemination — the first such pair anywhere in the world,” said the University of Pretoria in a statement. The school’s scientists are also researching the reproductive system of female African lions.

“We collected sperm from a healthy lion,” said Andre Ganswindt, the director of the University of Pretoria’s mammal research institute. His research team had a breakthrough after 18 months of intensive trials. When one of the lioness’ hormone levels were viable, she was artificially inseminated. 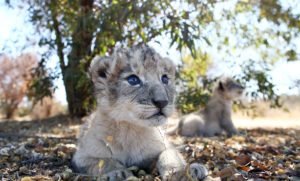 “And luckily it was successful,” said Ganswindt, ”There were several attempts, but surprisingly it didn’t take too much effort”. He also added that the breakthrough could be repeated, and scientists are optimistic that the technique can be used to save other endangered big cat species. Lions used to roam most of the African continent, but they are already extinct in 26 countries there and the numbers in the wild have fallen 43 percent in the past 20 years. There are only around 20,000 left in the wild, according to the International Union for Conservation of Nature.

“If we are not doing something about it, they will face extinction,” said Ganswindt.