The Little Girl Who Doesn’t Sleep

Robin Audette and Kirk Hisko are proud parents of a little girl named Ever. But because of her rare condition, these parents are exhausted and get onlyÂ  a few hours of sleep each night. This is because Ever suffers from a genetic and neurological disorder called Angelman syndrome. This syndrome affects a person’ sleeping habit, and means that Ever can survive with just an hour’s worth of sleep. 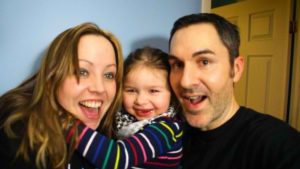 Ever’s parents have since developed a schedule wherein they take turns sleeping as the other parent stays up with the very energetic Ever. According to Robin, if they can get two or three hours of sleep from their little girl, they consider it to be a good night. But during the nights that she only gets 1 hour of sleep, they make sure that she has at least one parent to stay with her. Robin says: Â “We’re only human and we need to sleep, but she doesn’t. It’s amazing (that) she can function with no sleep and still be happy.” 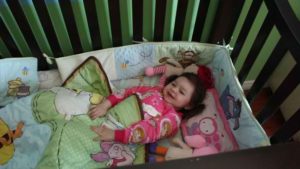 For a while, the Hiskos were worried about little Ever because of a few symptoms that arose early on. Among the other symptoms of the condition include developmental delays in mobility and speech and feeding difficulties. It took 8 months for Ever’s parents to find the diagnosis, but they were relieved when they finally found out what they were dealing with. This allowed them to start Ever on therapy for her condition. The Angelman syndrome is a very rare disorder that only occurs approximately 12 out of 20,000 people.