NASA has released the spacecraft Cassini’s pictures of Earth from the rings of the planet Saturn, some 870 million miles away. The spacecraft was orbiting the planet when it took the photos of its home planet. These are to be the last photos that the probe will be taking from the orbit, before it dives into the planet’s surface. The beautiful photo shows a once in a lifetime perspective of our planet from millions of miles away. In the photo, the planet Earth only looks like a tiny blue dot framed by the icy rings of Saturn. 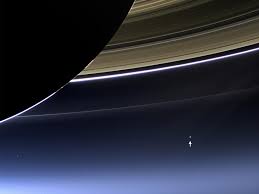 The spacecraft Cassini has been exploring the space around Saturn for the past 13 years. It has gathered data about the structure and composition of the rings and it has also been monitoring the planet’s moons and the nearby planets. Last week, the spacecraft will be probing Titan, the largest moon of Saturn, for a last time before it prepares for its final maneuver of diving into the planet itself. 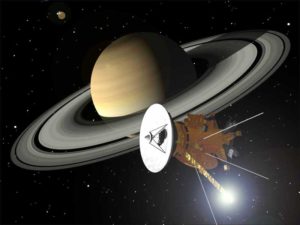 The image was taken from the orbit of the planet, where the spacecraft has gathered several other images from this perspective. Cassini has taken at least 30 more photographs from its wide angle lens camera. The image shown was a very rare photo as it has the planet earth, our moon (as a very faint speck near our planet), and the rings of Saturn all in one shot. The photo only shows the outermost ring of the planet. The entire ring system of the planet Saturn spans more than 40,000 miles.