Investigators have stated that they have evidence of new Indochinese tiger cubs located in the eastern jungle of Thailand. This is just the second wild breeding population of the endangered tigers. According to Thailand’s Department of National Parks, Wildlife and Plant Conservation, the tigers were photographed with a series of cameras left behind to survey the jungle.Â The statement also noted how they were amazed at the resilience of the tigers in that area, given that poaching and illegal rosewood logging is prevalent in the area. 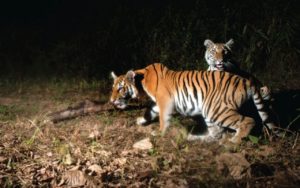 Conservationists were happy to report the existence of these tigers, given the endangered state of the species. The Indochinese tiger population has been steadily declining in the past few decades, with less than 300 known tigers left in the world. This breeding ground in the eastern jungle of Thailand is the second known breeding area and the only one left in the wild. The other known breeding area is located in the Huai Kha Khaeng Wildlife Sanctuary in the western Side of Thailand. 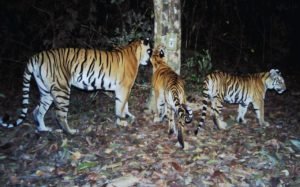 Several wild life agencies, including the Panthera wild cat conservation group, are fighting against animal trafficking, poaching, and illegal logging, which has decimated the tiger population in Asia. The Indochinese tigers had once been found across much of Asia including areas of China, Cambodia, Laos, and Vietnam. Now these Tigers can only be found in Thailand and Myanmar. Indochinese tigers are a smaller species than Bengal and Siberian tigers.