6-year old Riley Voss of Raleigh was able to live out his dream when he was invited by scientists at the North Caroline Museum of Natural Science. He was invited to learn more about his beloved dinosaurs in a fully equipped laboratory with authentic dinosaur fossils. This meant a lot to Riley and his family because this young man is battling terminal cancer. 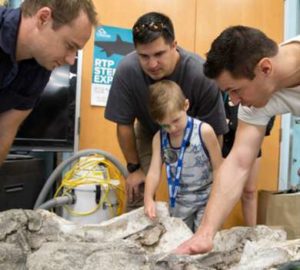 It was last year when Riley was diagnosed with diffuse intrinsic pontine glioma. The illness is a very rare, and unfortunately, a very aggressive brain cancer that affects young children. The cancer is usually fatal. Most kids only live 9 months to a year after being diagnosed. But radiation treatment is helping to shrink the brain tumor and buy Riley some precious time with his family. In the past few months, Riley has been obsessed with dinosaurs. He spends most of his time pretending to lecture a class about dinosaurs while wearing a dinosaur costume. 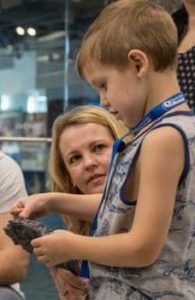 “Certainly the past few months have been really hard on him,” said his mother Ashley Voss. “We’re making the best out of our horrible situation. He was so excited, especially when they let him do real paleontology work. You can see his face light up. He felt like by the end of the day he was an actual, real paleontologist. It was a dream come true for him.” Voss says that instead of focusing on the treatment and the doctors’ appointments, the family tries to make each day special for Riley. To donate to the family’s hospital bills, you can visit the website:Â https://rileyscancersupport.com/donate/ .