Earlier this week, a match between Juan Martin del Potro and Nicolas Almagro at the French Open in Roland Garros was put under a spotlight after the events that occurred between the two tennis stars. It was a second round match between the two seeded tennis pros with the score tied with one set each. Then on the third set, Del Potro hit a serve and Almagro did not move to return. In fact, he and just stood there with his hands on his knees, obviously in pain. Everyone in the stadium knew the heartbreaking fact that Almagro had suffered an injury and would be forced to retire from the match. 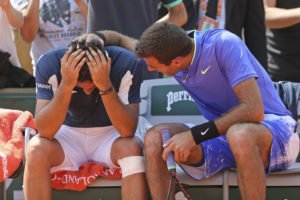 What occurred next showed true sportsmanship, as Del Potro crossed the net to console his injured opponent. Almagro then lay on the court, openly crying and covering his face as medical personnel approached the fallen tennis player. Del Potro remained at his side and continued to console him. He can even be seen asking for a bottle of water for Almagro. Del Potro also helped Nicolas get on his feet and escorted him back to the bench, where he even helped in packing Almagro’s bag. 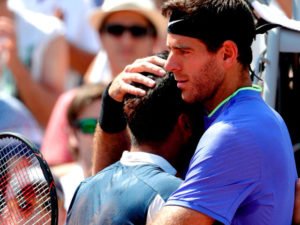 Del Potro was ranked as the 29th player on the ATP tour entering the French Open. Del Potro is no stranger to injury as he was forced to spend months recovering from various injuries throughout his career. This explains why he was so empathic with Almagro and his knee injury during their match. Almagro has had to struggle with various injuries in the past few years and this knee injury will likely keep him out of the ATP tour for the next few months.