Missing your graduation can be one of the worst things experiences you can have. Not only is it a disservice to your school and your classmates (and the family and friends that attended), but it is an important lifetime milestone that you may never get back. That was the prospect that 22-year old Jerich Marco Alcantara was facing when he was stuck in a New York City train, unable to make it to the Radio Music Hall for the graduation ceremony of Hunter College. 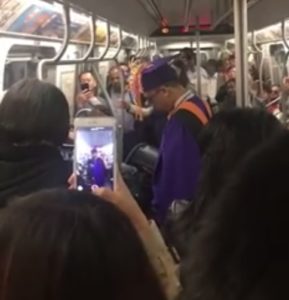 Alcantara was stuck on the E train in Queens, New York. He was already in a train for 90 minutes and was stuck there because of a brake failure in the engine car. Then he was stuck in a rescue train for another half an hour. Thankfully, he was not alone. With him on the cart were his parents, friends, and girlfriend. All of them were there to see him graduate. After a while, he loudly thanked each one of them for coming to see his graduation. This drew a cheer from a the other passengers in that were stuck there. 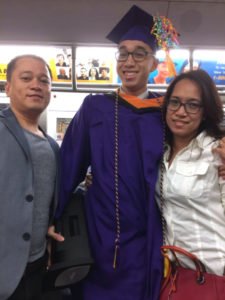 After a while, they all figured that if Alcantara could not make it to his graduation, then his graduation would occur wherever he was. After all, he was already wearing his graduation gown and cap. The people gathered in the stuck train cart started an impromptu graduation ceremony that was captured on video by most of the people that were there. A friend had taken a picture of a diploma using an app and passed it to Alcantara. Another passenger had played the graduation song favorite “Time of Your Life” by Green Day on their phone.