It takes just one powerful image to touch the lives of people all over the world. During a benefit concert in Manchester, England, one of the most shared images of the event was that of a dancing policeman. The police officer could be seen dancing in a circle with a few children, enjoying the music played onstage. This simple act exemplified the city’s resilience and stance to stand together, even in the face of such terror. 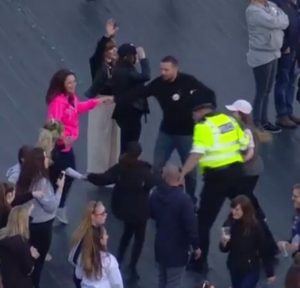 Several cameras at Ariana Grande-led benefit concert caught the British policeman and his little impromptu dance. The officer was wearing a hat and a yellow safety shirt and started dancing with children to the tune of Justin Beiber’s performance. Bieber was onstage urging the crown to fight evil with love. The footage of the dancing policeman has since gone viral online, inspiring several people share the concert’s message of love and unity. 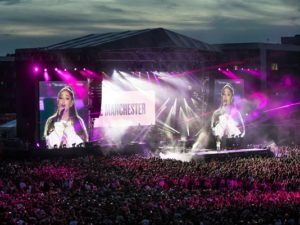 The moment was first captures during a live stream of the entire event. The benefit concert was for the British Red Cross and was in support of the victims that were attacked in May 22 after a concert by Ariana Grande. Grande was just one of the headliners of the benefit concert, which also features music stars such as Katy Perry, Justin Bieber, Miley Cyrus, Coldplay, and Pharrell Williams. The artists all took stage with messages of unity and support for the victims of the attack. The entire event was held at the Emirates Old Trafford Cricket Ground, just a few miles away from the Manchester Arena, where the attack occurred.