In Houston Texas, a teenage boy saw an elderly woman waiting at a bus stop. It was a very hot day in Texas and the sun was out. So this kind young man pulled out his umbrella so that the woman could wait in the shade. He did this for almost two hours. The story has since been shared on social media, where it quickly went viral. 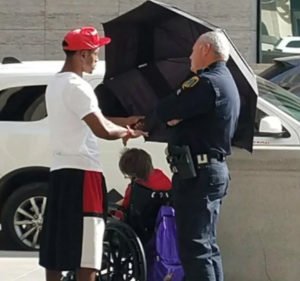 The teenager was Louis Jordan. He was picking up his mother from work in downtown Houston when he saw the elderly woman in the wheelchair. She was waiting for a Metro Lift, a public transportation bus for individuals with disabilities. It was a very hot day so the youth decided to use his umbrella to shade the elderly woman from the sun.

“It was unbearably hot. I wouldn’t want to be out there in the sun,” Jordan said in an interview. He grabbed an umbrella from his car and walked over to the woman to keep her in the shade. He waited with her at the bus stop for nearly two hours. “Come to find out, it was going to be a little longer for the Metro Lift to come and get her,” he said. “We ended up waiting out there for an hour and 45 minutes.” 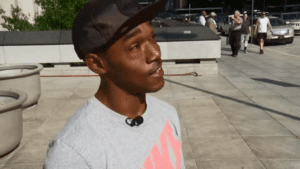 The entire scene was witnessed by Jordan’s mother, Bernette Botts. Botts took a picture and posted it on social media, where it was shared and liked by hundreds of people. Botts and her son have gotten praise from people all over the country. “I am one proud mama,” said Botts in an interview.