Just a few hours before the Royal Wedding of Prince Harry and Meghan Markle in Windsor Castle, a very different royal wedding was taking place. This ceremony had Renaissance costumes, trumpets, and royal guests too, but it happened at a Stew Leonard’s Supermarket, in Long Island New York. The betrothed couple was Rudy and Nadine Michaud. They took inspiration from the other more famous wedding that was taking place at the same day across the pond.

Despite being all the way across the Atlantic, the couple did their best to mirror the wedding of the year. They even convinced the staff of the store to wear velvet medieval costumes as they cheered on the couple. It was a public ceremony, and a lot of people chipped in to make the ceremony more of a royal wedding. Some of the guests even had royal fanfare such as trumpets playing in the background. 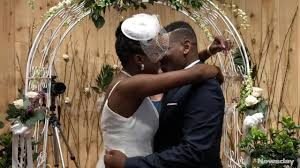 “My dad started this store back in 1969 and I can tell you this is the first royal wedding we’ve ever had in Stew Leonard’s, but we’re excited,” said baker Beth Leonard Hollis. To help with the celebrations, Leonard Hollis baked several cakes for Michaud, including one that mirrored the cake of Harry and Meghan, a white cake with lemon and elderflowers.

“We baked the exact same cake that they’re having over in England for the royal wedding,” Leonard Hollis said. Aside from this, the Michauds also had interesting witnesses. They had Prince Harry and Meghan Markle to witness the ceremony, although these versions of the royal couple were only just cardboard cutouts.