Earlier this week, a video made by a group of Indonesian students has gone viral. They recreated a famous scene from the Disney movie Mulan shot-for-shot. The video was uploaded on twitter and has been viewed more than 8 million times just on the social media site. It has seen been shared and posted on several video streaming sites and social media pages. 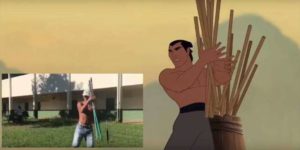 The video was a recreation of the scene in the movie Mulan with the song “I’ll Make a Man Out of You”. What makes the video so impressive is how these teenagers were able to recreate the entire song shot-for-shot. It was shared on social media under the title ‘Micronesian Mulan’. It was made as part of a school project, which makes it even more impressive.

The video is a short one, taking only 38 seconds. But according to the group, it took them three days to recreate the scene. One of the reasons why it took so long was because they had to perfect their stick twirling skills that were needed for the scene. They also had to learn the lyrics so they could perfectly dub the song to their mouthing of the works. 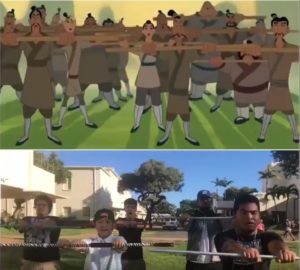 “Three days, five broken sticks, a shoe and volleyball stuck in a tree, and 2883827274832 hours of bloopers ALL for a 38 second video” said uploader @senseileskee. The video immediately went viral and has been retweeted or shared more than 200,000 times. Â Mulan was a 1998 Disney movie about a Chinese daughter who pretends to be a man and joins the army to protect his father from war.