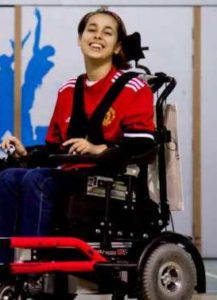 Powerchair football is made up of four players on each side. Each player makes use of a specialized wheelchair to control and hit an oversized football. Just like football, each goal represents one point. The sport is quickly becoming popular in the UK, mostly due to the fact that it offers a chance for people of all abilities and disabilities to compete in “the beautiful game”. Even with a specialized wheelchair, there are several limitations for players. But Hannah says that playing the game makes her feel like she can do anything. 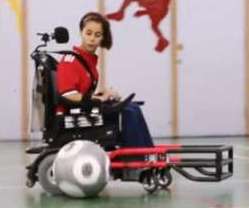 “My favorite thing about powerchair football is just being able to play football on a level playing field where disability isn’t a barrier,” Hannah said in a statement. “I am currently the only girl in my club but I get no special treatment â€” other teams used to think I was an easy target, but they soon learned looks can be deceiving!” Hannah started playing powerchair football in 2012 after her condition left her unable to play on her feet. Her skills caught the attention of some Manchester United players, like star defender Eric Bailly.

“Being part of the club has really helped me in many ways,” she said. “I have gained more wheelchair control, which I am able to use in everyday situations, and I have more confidence in my own abilities. I have learnt to be part of a team and have made friends with people who have similar disabilities and of a similar age who have the same interests and enjoy nights out.Â  I’m a normal 19-year-old girl. I have always loved football. I just want to be the best I can be.”