Earlier this week, a runner at a marathon was just a few meters away from winning one of the biggest marathon races in the country when her legs suddenly gave out. She was devastated that her legs went out from under her when she was so close to victory. Luckily, the next runner behind had a golden heart. In an act of selflessness and sportsmanship, the other runner picked up the fallen racer and helped her cross the finish line.

32-year Chandler Self was a few meters away from the finish line of the Dallas Marathon when she suddenly collapsed. The runner behind her was 17-year old Ariana Luterman. When she saw Self collapse, she went over and helped her up so that she could finish the race. In fact, Luterman had to help Self get back on her feet several times during the final stretch so she could finish the race. 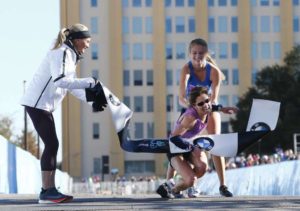 “I even tried to push her away, but her heart was overcome with kindness and compassion for me that I think she was like, ‘I gotta help her,'” Chandler recalled. Marcus Grunewald, the executive director of the Dallas Marathon, said that runners cannot receive any third party assistance from any spectator, race official, or even medical staff. They are not allowed help from anyone outside the race. But receiving help from other participants is in a “gray zone”.

“In this situation, the executive race committee got together and reviewed the results and are deeming [Self] the female marathon winner,” Grunewald said. “We’ve looked at the distance between her and the following four finishers. Even if she hadn’t had assistance, she still would have gotten first.” Luterman has been hailed as a hero and a true sportsman (sportswoman) when her story went viral online.