A 12-year old has become an internet sensation after videos and pictures of him playing basketball went viral. The 12-year old boy named Oliver Rioux has been dominating the games he has been playing in. Mostly because this young man is 6 feet and 10 inches tall (2 meters). Pictures of the boy towering over his peers have been shared all over social media. 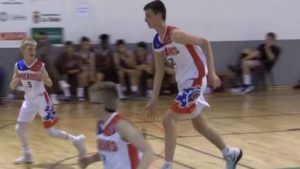 Rioux is currently playing for the Frenchy Phenoms in junior basketball play. He is so tall that he is able to dunk the ball through the net without even taking his feet off the ground. Most 12-year olds are barely even able to touch the net dangling from the ring, but Oliver can do with ease. He also stands at least two feet above most players his age. 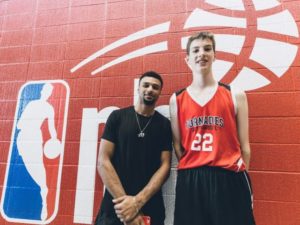 A video of one of Rioux’s games were posted in Twitter and has gotten a lot of shares and views. Most people are amazed that this 12-year old boy is already so tall, while some have been pointing out how unfair it is to have such a height advantage over the competition.

The Frenchy Phenoms seem to have a sound strategy of passing the ball to Rioux so that he can get inside and score without any real threat from the defense. The scary thing about this young man is that he is just on the onset of puberty at 12 years old. There is a good chance that he hasn’t hit his final height yet and he might grow even taller in the next few years.